“I dared handicapped, underprivileged and people who were being prejudiced against. –– I’m a champion for the underdogs. Dwarfs, blind men, handicapped people –– racial minorities, and women. I believed in them so much –– that they started believing in themselves.”

“Up until you’re six you get encouragement, by 14 you get discouraged. By the time you enter the “business card era” of your life, you’re without the courage and enthusiasm you had when you were a kid.” (Author note: Picture me at this moment –– listening with awe, and writing furiously at the same time.)

This film has been used to motivate thousands of people by companies throughout this country and abroad. It is recognized as one of the MOST DYNAMIC. Motivational films ever made! Entertaining and loaded with success principles, it will inspire you to achieve your goals in Life! Mr. Turner was filmed before a live audience of 2,500 and closed circuit telecast simultaneously to an additional 30,000 people! In addition, many millions of people have viewed and been inspired by this film! This was the type of speech given over and over that brought in over 250 Million Dollars.

“My product was positive attitude. Still is. The most powerful success tool in the world is the human mind –– and 95% of Americans don’t control theirs. Their attitudes are controlled by negative things (local news, violence, politics, taxes, lawsuits) and negative people.”

Jeffrey Gitomer is the author of The Sales Bible, and Customer Satisfaction is Worthless Customer Loyalty is Priceless. President of Charlotte–based Buy Gitomer, he gives seminars, runs annual sales meetings, and conducts training programs on selling and customer service.

Jeffrey Gitomer wrote: Glenn Turner changes peoples minds…for the better. Meeting Glenn Turner was the thrill of a lifetime. There are not enough ways I can say “thank you” to him. Turner’s inspiration and lessons have provided me with sales skills and a positive attitude for the past 23 years. Find whatever books and tapes of his you can –– and heed them. They work.

Interview Jeffrey did with Mr. Turner in 1995:

Yesterday, we heard of “The Secret” that tells us about the laws of attraction, what is so unique about this video is that it talked about those principles long before it was main stream or on the Oprah show. Mr. Turner gets right to the point in everyday language everyone can understand.

Turner’s advice to the reader: “Aching to make it on your own in the world? Want to quit your job and go out to grasp the brass ring of the entrepreneurial dream? Here’s the advice I’ve given thousands of people who started with me and made it big –– If I can, you can.”

“I showed people a way to get their enthusiasm and attitude back. Thousands did, and even though in the end the laws (or lack of them) made the company fail –– these people did not. Hundreds of them are millionaires today because of the concepts they learned with me. I taught them how to take back control of their mind.”

Within this video lies the secrets of Glenn W. Turner’s early success! With over one million copies already sold, this energized man motivates millions to sell more, perform better, live life fuller, and understand how to believe in themselves and tap their hidden potential. 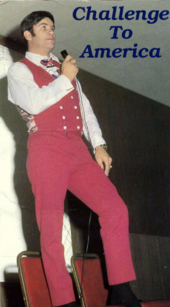 Now it’s 1995. After 4 years in prison (released in 1992) on some of the most trumped up charges in the world, “I’m better not bitter.” Said Turner grinning. “They took my money –– but all the money loss and all the imprisonment in the world couldn’t break my spirit.”

“I told them, 3 out of 4 who join my company won’t make it because they will listen to friends, relatives, spouses, and neighbors telling them: “It won’t work, and you’re a fool to try.” Pukers I call them. People who have no guts and don’t want anyone else to get guts.” Said Turner, talking as though he was on the platform 25 years ago.

It will do the same for you!  Challenge to America is one of the most timeless works of the motivational arena; as you watch this video, remember that it has been the driving force behind countless Americans.